How many things can you do with a pentatonic scale?

In this post I show you a way to analyse the pentatonic scale, understand how it is generated and how you can use it creatively.

How do you create a pentatonic scale?

There are several methods to create a five sound (penta-tonic) scale within an octave. The most common one is to start from a major scale and eliminate all half step intervals, so as to obtain just step or minor third intervals.

You thus leave out the fourth and the seventh, i.e. F and B:

You can derive the relative minor from a major pentatonic scale. It can be considered as a natural minor scale without the second and the sixth.

Figure 3 shows the modes in the staff and on the right the most comfortable shapes to play on the electric bass or double bass. 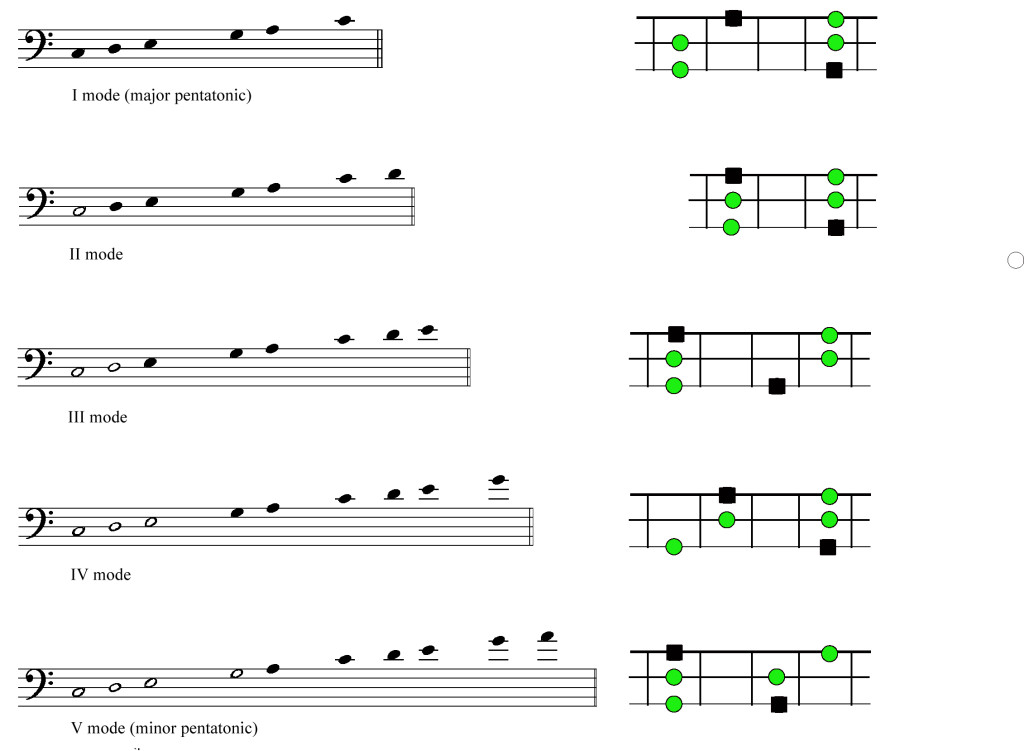 So, what’s the most effective way to understand a pentatonic scale?

There are at least two useful references to master this scale.

This simple drawing, which at first glance might seem a philosophical speculation with little relation to making music in practice, tells us that the same scale can be considered as a sequence of notes that move by consecutive fourths or fifths, based on the direction you choose, clockwise or anticlockwise.

This leads us directly to what is called Quartal harmony, a system that has been extensively used by all XX century composers and improvisers, both classical (Stravinsky, Berg, Satie…) and jazz (Herbie Hancock, McCoy Tyner, Chick Corea…) since Bela Bartok’s times.

Figure 6 shows the notes of the scale both in a horizontal arrangement, i.e. the A minor pentatonic, and in a vertical arrangement through a chord based on fourths starting from E.

3. 6/9 chord
Figure 6 creates a chord with 4 intervals of overlapping fourths. This enables us to view the pentatonic scale from another perspective. This chord is nothing else but a C6/9 that is built on the second inversion, i.e. on the third of the C chord. This leads us to figure 7 which shows how this scale, missing all half steps intervals, can go through all aspects of music: melody, traditional harmony and quartal harmony.

Does this mean we have found the least common multiple?

Yep! We have found the least common multiple between tonal harmony (6/9 chord), modal harmony (fourths chords) and melody. This simple key allows us to open up to a wide range of musical styles, from jazz to funk, from rock to Stravinsky, Bartok, Hindemith and the first Schoenberg, until the King Crimson or the Bulgarian voices… Cool!!

If you want to put into practice all of these concepts, it is easier if you start from the scale, i.e. focusing on the melody. In particular, we will see how to use the pentatonic scales to play “in”, i.e. within a given chord.

Let’s go back to figure 4, which showed a minor pentatonic scale (or an m7 chord with the eleventh). We know this chord is built on the second, third and sixth degree of a major scale, as shown in figure 8. 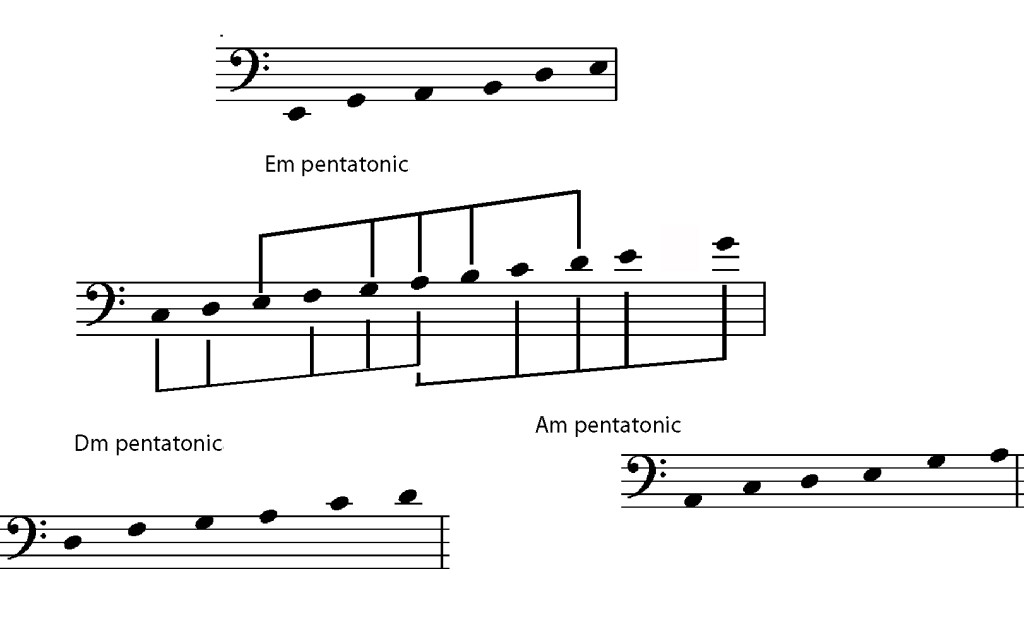 This gives us a great deal of valuable resources to play: for example on an Am7 chord (Aeolian mode) I can use the Dm or Am minor pentatonic and still play In, i.e. without producing much dissonance. Figure 10 shows the possibilities to play (in) in C major, since the three pentatonic scales play very well on any chord that derives from C major.

Figure 12 shows the relation between the pentatonic scales within the key (In) in the circle of fifths. The C major pentatonic is the reference scale, the other two produce the same level of dissonance but when used together they create an In effect.

Do not forget that A minor is also C major, and of course this relation can be transported to all the other keys while keeping the same relations.

Which advantages can you get from this approach?

The fact of having the same notes of a major scales organised in different scales gives you a great choice of materials to use for improvisation and composition. In other words:

The result is an unceasing variation of musical phrases, provided you master well this material and have assimilated this approach enough to be able to play naturally and instinctively.

What’s more, pentatonic scales that are quite easy to play on the electric bass because they do not require big shifts of the hand to move from a note to the other.

Finally, I invite you to take a look at this video where I demonstrate the use of the pentatonic scales within the key (In). In this video I play the piano while Ariele Aldrovandi, a young bassist from my bass school BLIT, accompanies me on the bass. His bass line is entirely built on the Gm and the Bm pentatonic scales. When I improvise I use the relative minor and the Dorian mode for each chord, but I also add chromatic notes and quartal harmonies to create some “out” effects.

Figure 13 shows the main bass line that is played by my student.